Strike! A song about the match girls

“When you strike you make a light.”

I wrote this song in response to this beautiful banner that was made by volunteers as part of the museum’s “Fabric of Protest” programme. It’s a tribute to the match girls strike at Bryant and May in 1888 that involved over 1400 workers. The strike was about the poor working conditions in the match factory, including fourteen-hour work days, poor pay, excessive fines and deadly effects of working with phosphorus.

Over the course of my residency at the museum I often bumped into the Fabric of Protest group and liked to pop in and have a chat. (The workshops are led by artist Helen Mather you can read her blog here). On one occasion I was even co-opted to contribute and I did some stuffing of one of the matches that adorn the banner. I was so impressed by the work on the banner I offered to write a song to accompany it.

The song picks up on some details from the banner such as the roses, which were given to the girls by social campaigner and journalist Annie Besant and the slogan “it just went like tinder”. This is a quote from one of the women involved – ‘It just went like tinder; one girl began, and the rest said “yes”, so out we all went’.

Annie Besant’s name is the one most commonly associated with the strike, although actually she played no part in organising it. What she did though was to act as a champion for the cause. As a ‘respectable’ middle-class woman history remembers her more than the working class architects of this strike.

As part of my research I read Annie Besant’s article ‘White Slavery in London’ highlighting the issues at the factory. I also read around the topic online although I confess I didn’t have time to read all of ‘Striking a light’ the definitive account by Louise Raw (available in the museum shop!),but this summary on her website is a brilliant place to start.

What I found remarkable about this story is that it’s one of the earliest examples of a strike led by working class people and without any union involvement. Although the 1880s was a time when the New Unionism was forming the first big union strike was the Dock strike of 1889 – a full year after the match girls strike.

This strike and all it achieved was led by a group of remarkable young women . In fact in today’s society we could call them children, as they were girls of 13, 14 and 15 years old but then they had probably been in full time work for much of their young lives. They showed such strength and bravery when all the odds were stacked against them.

Starting a song is always hard. You are looking for the initial spark of an idea. My first instinct was to focus on an incident where Factory owner Mr Bryant had paid for a statue of Gladstone by taking money from the girls wages. In protest some girls cut their hands with stones and smeared the statue in blood. (Something that is still upheld today)

Feeling inspired by Louis Barabbas brilliant satire Hate, I tried to write a kind of musical hall thing to be sang in Mr Bryant’s voice…

Mr Theodore Bryant wishes to show the greatness of his own public spirit
By erecting a statue to an eminent statesman,
but who you may ask, is going to pay for it?
Why his workers of course, the girls will come forth
and money will flow from their delicate hands
These girls are so poor, they’ve never before known the pleasure of philanthropic giving
But be rest assured they’ll suffer no more, I shall dock all their pay by a shilling
Mr Gladstone’s deserving of his image preserving – his greatest for all generations
Yet my girls seems ungrateful, they talk of bread on the table
So I’ll close down the factory, just half a day but we’ll call it the girl’s unpaid holiday
Benevolence is contagious, I shall levy their wages
etc etc ……..

There were some nice words and rhymes in it, and I laboured it for a long time, but I just wasn’t feeling it. One of the most important things to learn in songwriting is knowing when to give up! So I then tried a different tack, going for something dark and brooding, Victorian Gothic, maybe sprinkle in a few Jack the Ripper references, as this strike was around the same time –

I thought I was going down a Nick Cave avenue, but it soon turned out to be a cul-de-sac! In the end I abandoned the statue idea altogether and started with a fresh sheet of paper. I went back to the banner and looked at the elements that had been sewn on it – matches and flowers were the most obvious. The catalyst line was –

Annie gave me roses on the day I turned fourteen.

Once I had that first line it seemed to flow from there. As this wasn’t a song about the right to vote I didn’t record it but you can hear this live version I played at the museum.

I recently recorded this song for a new album. Coming back to it after a few years a couple of things struck me. Firstly it didn’t seem right to sing in the first person a song that would be in the voice of a young woman. Secondly I think I gave too much prominence to Annie Besant by naming her in the song. So I have rewritten it. This happens sometimes with songs. You don’t always get it right first time. Ideally I would love this song to be sung in the first person, I think it would work best. But that needs to be a woman that sings it, not me. So for my version I have rewritten it and changed it to a third person observational song – “They gave her roses” instead of “She gave me roses”

One thought on “Strike! A song about the match girls” 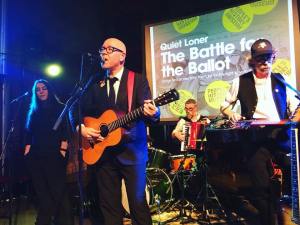 Through 2016 Matt Hill (aka Quiet Loner) was songwriter-in-residence at The People’s History Museum in Manchester, UK. This site contains the blog about the residency along with information about the show and album that sprang from it – The battle for the ballot.

The project was supported by a grant from Arts Council England.